Philharmonic orchestras from Berlin, Munich, Dresden, St. Petersburg and Hong Kong will all perform at the symphonic 2020-21 season of Palau 100 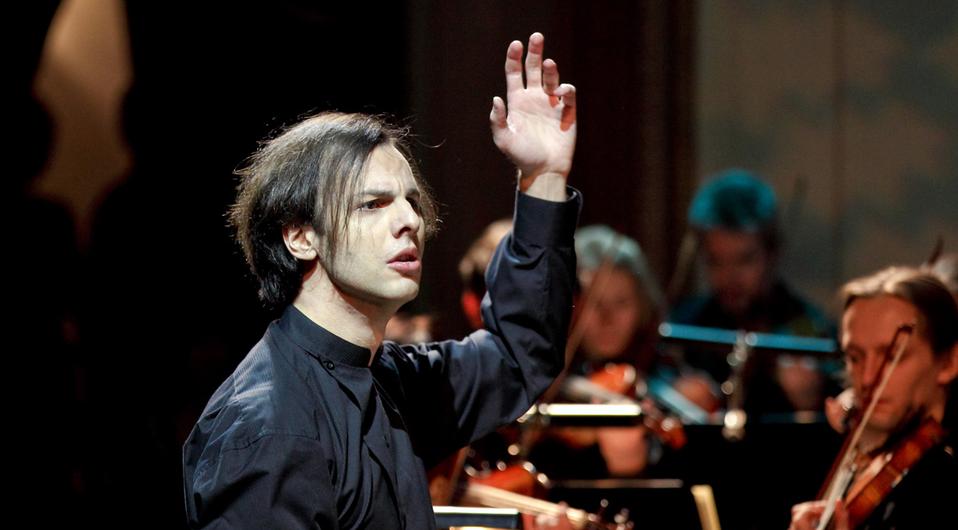 The Orfeó Català will take part in two concerts with Yuri Temirkanov and François-Xavier Roth.

For yet another year, Palau 100, the leading concert series run by Fundació Orfeó Català-Palau de la Música Catalana, has announced a programme with prestigious names and groups from the international scene. Audiences are offered an encounter with musical excellence, as each of the 12 concerts on the Palau 100 programme is a unique and exceptional event —in addition to 5 extra concerts with the extended season ticket. A space for music lovers that features some of the most important figures on the international classical music scene, while offering music fans the chance to discover new pieces, composers and performers.

The new references in orchestral conducting, such as Kirill Petrenko, Teodor Currentzis, Santtu-Matias Rouvali, François-Xavier Roth, Barbara Hannigan and Cristian Măcelaru, will all take up the baton. They will perform alongside distinguished musicians who are considered true legends: Yuri Temirkanov, Elisabeth Leonskaja and Pinchas Zukermann.

The Orfeó Català will perform the "Polovtsian Dances" from Borodin’s Prince Igor alongside the St. Petersburg Philharmonic, conducted by Yuri Temirkanov, and the choir will also sing Daphnis et Chloé Suite No. 2 by Ravel together with Les Siècles, conducted by François-Xavier Roth—first time performances with both these conductors.

Finnish composer Kaija Saariaho will be the guest composer for the next season at Palau de la Música Catalana, with two of her works to be performed: Ciel d'hiver and the clarinet concerto "D'Om le Vrai Sens". The season also features two key events. On the one hand, the full performance of Robert Schumann's four Symphonies, conducted by Daniele Gatti and performed by the Mahler Chamber Orchestra, shown over two consecutive days. The concert series also features pieces dedicated to Richard Strauss’ heroes—the symphonic poems A Hero's Life and Don Quixote, with the former performed by the Dresden Philharmonic and conducted by Pablo González, and the latter performed by the WDR Symphony Orchestra Cologne and conducted by Cristian Măcelaru. The Palau will also be commemorating the 50th anniversary of Igor Stravinsky’s death with a performance of The Firebird, and the 100th anniversary of Camille Saint-Saëns death with renditions of Organ Symphony No. 3 and Bacanal from Samson et Dalila. Other great pieces will also be performed, such as Brahms' A German Requiem, Haydn's The Creation and the quintessential Catalan opera, El giravolt de maig by Eduard Toldrà.

This eminently symphonic season will feature great orchestras being conducted by both up-and-coming and well-established conductors, performing alongside acclaimed ensembles and renowned musicians

Russia's Kirill Petrenko will conduct the Berlin Philharmonic, the orchestra he has been leading since last year. He will present a programme that includes Mozart's Symphony No. 25 and Exsultate, jubilate, as well as Tchaikovsky's Symphony No. 1 (02/05/21).

A further highlight is one of the first women conductors to perform at Palau 100 for many years. Canada’s Barbara Hannigan will conduct the Munich Philharmonic, and will also perform as solo soprano in Luigi Nono's Djamila Boupacha, dedicated to Djamila Boupacha herself, a former militant from the Algerian National Liberation Front. The programme is rounded off with Hadyn's Symphony No. 49 and Mahler's Symphony No. 4, in which the soprano will also perform as a soloist. (16/02/21).

The Asturian Pablo González will take up the baton for the Dresden Philharmonic to conduct Strauss' symphonic poem A Hero’s Life. He will also accompany Elisabeth Leonskaja in Beethoven's Piano Concerto No. 4 (25/01/21).

Russia’s Yuri Temirkanov, together with the St. Petersburg Philharmonic, will offer a programme of Russian music—accompanied by the Orfeó Català for the ‘Polovtsian Dances’ from Borodin’s Prince Igor, the first time the Palau's choir will work together with the conductor (26/11/20). The programme will be rounded off by Stravinsky’s Divertimento from Le Baiser de la fée, and extracts from Romeo and Juliet (including a selection from Suite No. 1 and 2).

Dutchman Jaap van Zweden will conduct the Hong Kong Philharmonic for their performances of Shostakovich's Symphony No. 7, ‘Leningrad’ and Ravel's Piano Concerto in G Major with Kathia Buniatishvili (11/05/21).

Greece’s Teodor Currentzis will conduct his ensemble, Musica Aeterna, for their performance of Tchaikovsky's Symphony No. 6 and the Adagio from Mahler's Symphony No. 10 (10/12/20).

Finland’s Santtu-Matias Rouvali will conduct the Göteborg Symphony, with Truls Mørk as soloist, as they perform Dvořák’s Cello Concerto at the season’s opening concert (19/10/20), which will also include the Nocturne from Sibelius' King Christian II suite and Stravinsky's The Firebird.

Frenchman François-Xavier Roth will return for the second year in a row (he made his début at the Palau during the 2019-20 season) with his ensemble Les Siècles, in a programme featuring French music. Roth and his ensemble will be performing alongside the Orfeó Català for the first time, with a rendition of Ravel’s Suite No. 2 from Daphnis et Chloé. The programme will also include the ‘Bacanal’ from Samson et Dalila by Saint-Saëns and ‘Organ’ Symphony No. 3, also by Saint-Saëns, with Valencian Juan de la Rubia as the organist (19/04/21).

Romania’s Cristian Măcelaru will head the WDR Symphony Orchestra Cologne, conducting Richard Strauss’ symphonic poem for cello, viola and orchestra, Don Quixote, which will feature Amanda Forsyth (cello) and Pinchas Zukermann (viola) as soloists. The orchestra will also perform renditions of Barber's Adagio for Strings and Mozart's Violin Concerto No. 3, with Pinchas Zukermann in the role of soloist (04/03/21).

Italian Giuliano Carmignola will conduct the Venice Baroque Orchestra from the violin, with a programme that features works by Geminiani and Vivaldi, including The Four Seasons (09/11/20).

Germany's Thomas Hengelbrock and the Balthasar Neumann Chor und Orchester will once again visit the Palau to perform Brahms’ A German Requiem, which will feature the solos by soprano Regula Mühlemann and baritone Michael Nagy (04/02/21).

The Catalan Josep Pons and the Symphony Orchestra of the Gran Teatre del Liceu will return once more to Palau 100, this time with soprano Camilla Nylund as a guest performer. They will play an eminently operatic programme, featuring pieces by Wagner, Ligeti and Strauss (25/11/20). Catalan conductor Antoni Ros Marbà will raise the baton for the Catalan opera El giravolt de maig by Eduard Toldrà, performing alongside the Barcelona Symphony and Catalonia National Orchestra (OBC), an ensemble that regularly performs during the season. Singers Elena Copons, Gemma Coma-Alabert, Roger Padullés and Lluís Vilamajó will take on leading roles in the performance. The concert will pay tribute to Eduard Toldrà on the 125th anniversary of his birth, bringing the 2020-21 season of Palau 100 to a close (06/06/21).

Catalan conductor Jordi Savall will return to Palau 100 with Le Concert des Nations and La Capella Reial de Catalunya to perform a rendition of Haydn’s The Creation, a piece that he will be conducting for the first time at the Palau’s request. The rendition will feature the solo voices of soprano Yeree Suh, tenor Tilman Lichdi and bass-baritone Matthias Winckhler (04/05/21).

The Catalan Ernest Martínez Izquierdo will perform at Palau 100 alongside the Royal Seville Symphony Orchestra with an entirely Finnish programme featuring two pieces by Kaija Saariaho—guest composer during the Palau's 2020-21 season—Ciel d'hiver and the clarinet concerto D'Om le Vrai Sens (with Finnish Kari Krikku playing solo clarinet), as well as Sibelius' Symphony No. 5 (10/04/21).

The programme for the next season of Palau 100 features two key musical themes: the first, Schumann’s four Symphonies, will be performed by the Mahler Chamber Orchestra and conducted by Daniele Gatti over two consecutive concerts (12 and 13 April 2021); while the second theme looks at heroes, with Richard Strauss’ symphonic poems A Hero’s Life, performed by the Dresden Philharmonic and conducted by Pablo González (25/01/21), and Don Quixote, performed by the WDR Symphony Orchestra Cologne and conducted by Cristian Măcelaru (04/03/21). Audiences will also be able to enjoy musical masterpieces such as Stravinsky's The Firebird (19/10/20), Brahms' A German Requiem with Thomas Hengelbrock's Balthasar Neumann Chor & Orchester (04/02/21), and Haydn's The Creation performed by Jordi Savall and his ensembles (04/05/21).

As usual, a ‘Let’s Talk About Music’ conference will be held one hour before the start of each Palau 100 concert. This classical music talk is offered by experts who provide audience members with background information and a greater understanding of the concert programme, through composer secrets and the historical context in which pieces were composed. Each talk lasts 45 minutes, and they are held at the Petit Palau or the Orfeó Català's rehearsal room. The popular lectures have become a favourite among audiences, creating a community surrounding each event and gaining more followers by the day.

As of 19 February, the pre-booking period for new season tickets has been opened, and 2019-20 season ticket holders will be given priority when buying tickets for the upcoming Palau 100. For the first time, and to ensure that price is no obstacle for young classical music lovers, under-35s can buy a Youth Pass that gets them a 50% discount.