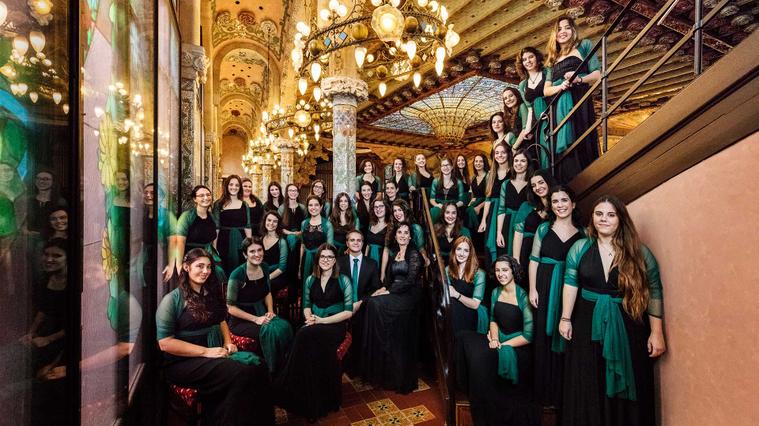 The Cor de Noies de l'Orfeó Català is a group of white voices made up of 40 singers between the ages of 16 and 25. This season they present the Stabat Mater by Giovanni Battista Pergolesi, a short-lived Baroque artist (1710-1736) who precisely wrote this composition at the end of his life, suffering from tuberculosis and when he knew that he would possibly die.

The work, with ten movements, talks about the pain of the Virgin during the crucifixion of Jesus. The Cor de Noies de l'Orfeó Català performs with Vespres d'Arnadí, a group that was created in 2005 by Dani Espasa (in this concert, on the harpsichord) and Pere Zaragoza to perform, with the utmost freshness but with historical instruments and criteria , the pieces of the Baroque repertoire. The soprano Ulrike Haller, an Italian singer, vocal coach for the choir, who has often collaborated with the Palau de la Música Catalana, among other Catalan musical institutions, and the mezzo-soprano Marta Infante, a artist born in Lleida with notable activity in the field of lieder who has performed with the main symphonic institutions in the country.

The concert has a scenic dimension that Davo Marín and Carme Milan take care of. They have created and performed the choreography, in a performance directed by Marc Rosich, a director and playwright who has had an intense relationship with music during his career (he has written librettos for various cantatas and operas, and has directed concert stagings) and who, in this edition of the Grec Festival de Barcelona, also presents and directs his text montage Isadora.

An endearing piece, the Stabat Mater is one of the most popular works of sacred music of the 18th century and this summer it is part of the choir season together with the Vespres d'Arnadí orchestra and with a unique stage proposal.

The program is dedicated to the Virgin Mary with the intention of exalting her figure and illustrating one of the most difficult moments of her existence: the suffering and death of her son. It also wants to be a tribute to all the mothers in the world who have also suffered and continue to mourn the loss of a child and fight for the rest of their lives to imagine, far from pain, a place for their little ones: May you stay in the arms of the angels.

For this reason, around the Stabat Mater, the piece from the Red Book of Montserrat (14th century) O Virgo Splendens will also be performed; the Ave Regina Caelorum by the French Baroque composer Marc-Antonine Charpentier; the creation Wiegala, by the Jewish writer and composer Ilse Weber, who died in 1944 in the Auschwitz concentration camp; the Maggie Siff song May you stay in the arms of the Angels; Lux aeterna, by Canadian composer Sarah Quartel; and the Salve Regina by the Hungarian Miklós Kocsár.

Enjoy a tour to discover the history and construction of the only modernist World Heritage Hall by UNESCO (6.30 pm), and a concert (8 pm)

Attention: you must bring your own headphones for the audio guide